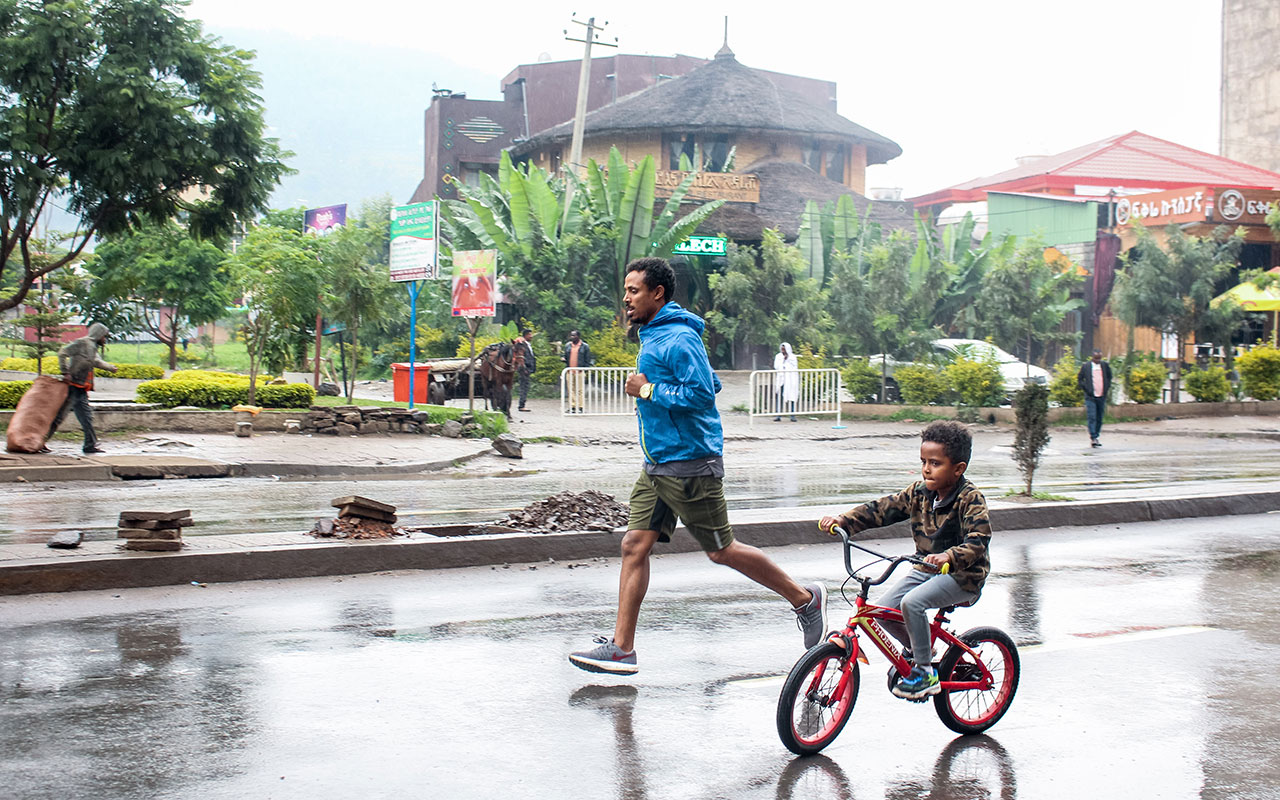 Fare City have interviewed academics, practitioners and campaigners from every corner of the globe, to investigate the ways in which the transport network and urban fabric of different global cities have responded to Covid-19.

Drawing from their research that spans London to Singapore, Detroit, Auckland, Addis Ababa, Bogota and Paris, Fare City’s founder Charles Critchell shares insights into why some global cities have responded to the urban challenges of the pandemic more effectively than others

Global cities are especially prone to the shock of unprecedented events. This is because they are typically denser, better-connected and more diverse than their smaller urban counterparts. Additionally, the proximity of those in global cities — allied with a finite amount of space and the need to socially distance — has made the ways in which people travel more important than ever.

Many cities have implemented bold measures to enable their residents to carry on as before. They include the installation of emergency cycleways, pop-up sidewalks, and continued access to green space. However, though different global cities have implemented similar measures, why is it that some have been able to implement them not only more quickly but more successfully than others, and what does this tell us about how cities may respond to similar events in the future?

Governance: Bringing people with you

In their overall response to the pandemic, two global cities, Singapore and Auckland, acted quickly and decisively. In Singapore, Rich Lambert relayed how the city-state “was able to quickly use and implement track and trace [based on] a lot of experience gained from previous pandemics”. Auckland-based urban designer George Weeks cited New Zealand’s “experience of biosecurity and a strong civil defence”, in addition to its world-leading Covid communications, as being decisive in enabling the country to respond more effectively than others. And indeed, it became the first country to declare itself Covid-free.

Clear communication is born out of clear governance, an advantage enjoyed by a third global city, Bogotá. The Colombian capital, led by mayor Claudia Lopez, was able to enforce a city-wide lockdown ahead of the rest of the country, as explained by the city’s bicycle mayor, Pablo Nieto: “The mayor of Bogotá is considered the second most powerful politician in the country …while Claudia Lopez is unlikely to be opposed as she elects the mayors for the city’s twenty localities herself”.

Though many global cities have a mayor, their mandate to govern is often curtailed by forces both above and below them, as has been most apparent in London. Town planner and London’s Car Free Day co-founder Marco Picardi attributes the city’s slow response and mixed messaging to a “systematic overlapping patchwork of governance”. This ambiguity has contributed to measures such as emergency cycleways taking weeks, if not months, to implement, whereas comparable schemes have been adopted virtually overnight in Bogotá and elsewhere.

The geographic composition of global cities is an additional impediment to realising change. Paris-based urban planner, Marion Lagadic, relayed how its mayor, Anne Hidalgo, must balance the competing priorities of a dense urban core with those of car-dependent suburbs. Detroit, on the other hand, has been hindered by its fiscal capacity to respond to the pandemic owing to the city’s inability to draw upon a wider tax base. According to Detroit-based mobility advocate Ted Tansley, this is “largely as a result of too many residents living in sprawling suburbs miles from the city’s downtown”.

In two global cities, London and Paris, green spaces were temporarily closed off to city residents during their lockdowns. In London, the closing of Victoria Park located in one of the city’s most deprived boroughs, Tower Hamlets, provoked an immediate backlash from residents. In Paris, the closure of parks effectively pushed people into closer contact as groups took to walking around park perimeters, owing to a lack of viable alternatives.

In stark contrast to other global cities, Ethiopia’s capital, Addis Ababa, did not enforce a lockdown, as explained by urban academic Biruk Terrefe: “The government realised that a full lockdown was not going to be an option as too many people are dependent on their daily wage”. Addis Ababa-based geographer Seble Samuel suggested that people’s use of urban space is intrinsic to the way the city operates and is embedded within the culture of Ethiopian society: “The informal economy is a massive part of city life and much of the work happens in the street”.

The value of public space in facilitating public life is perhaps best encapsulated on Bogotá’s streets. Since 1974, the city has hosted the monthly Ciclovia, literally translated as ‘cycleway’, a world-renowned event that has come to represent much more than the ability to cycle the city’s streets, unencumbered by motor traffic. Bicycle mayor Pablo Nieto explained that the Ciclovia was “born as an appropriation of the city’s streets” and is deeply embedded within the very culture of the city. Nieto believes that it is the city’s long-term pro-cycling policies which enabled Bogotá to rapidly build 80km of emergency cycleways in response to the pandemic.

The combination of political will, and the ability to be able to deliver on it, is perhaps most evident on the streets of Singapore. The Southeast Asian city-state has invested heavily in its limited urban space since it gained independence more than 50 years ago. Urban practitioner Rich Lambert explained that part of this urban strategy has been the development of the Park Connector Network, a 300km web of green infrastructure, including paths and cycleways, which has been used heavily by residents throughout Singapore’s lockdown.

Unlike Singapore, Auckland only recently began to prioritise the quality of its urban space, as the city authorities finally acknowledged in the mid-noughties that its built environment was uniformly lacklustre. In the intervening decade, its politicians and design professionals have worked hard to create an innovative design culture that culminated in the founding of the Auckland Design Office (ADO) in 2014.

George Weeks, a principal ADO urban designer, believes that one of its greatest successes has been the deployment of tactical urbanism in — or more accurately on — the city’s streets. Tactical urbanism, as described by Weeks, is a “lighter, quicker and cheaper” way of temporarily changing a city’s streets, primarily for the benefit of pedestrians. Measures can typically include painting, adding planters or building up pavements — measures which, since the start of the pandemic, have proved indispensable in providing more space for pedestrians in which to socially distance.

In Europe, even prior to the pandemic, Paris has led the way in efforts to carve out more space for non-motorised modes of travel. Mayor Anne Hidalgo has set the dual aims of reducing car dependency and, in turn, creating more cycleways in the city. Urban planner Marion Lagadic asserts that another of Hidalgo’s goals is to “redesign all of Paris’ streets as cyclable by 2024”. All this would suggest that the mayor has set a very clear path for the city — one that targets the Paris 2024 Olympics.

Trajectory: Getting, and staying, on track

Paris’ ambition to become a great cycling city can be linked to the hosting of the 2024 Olympics. Though the previous mayor, Bertrand Delanoë, had made cycling more acceptable and car-use less acceptable, it is Hidalgo who has thrust the city onto its current short, sharp trajectory. Paris, however, is not alone. Arguably, the global cities that have proved most resilient to the urban shock of the pandemic are those which are on their own unique trajectories, while others — including London and Detroit — have seemingly struggled to define and apply their urban vision.

The city on the longest trajectory is Singapore. Since the modern-day city-state was founded in 1965, it soon became recognised as one of the vaunted “Asian Tigers” by prioritising economic growth, long-term planning, political stability and quality of life for its residents. This can be seen in its high-quality state housing, world-leading public transport, and extensive green infrastructure. These advantages, when allied to its previous experience of pandemics, look set to position the city-state well post Covid-19.

On intermediate trajectories are Bogotá and Addis Ababa. Beginning in the mid-1990s, successive and innovative Bogotá mayors have built on each other’s work to not only make the city safer, but also to invest in both public transport and the development of one of the world’s most extensive cycle networks. The benefit of such an embedded cycling culture encouraged the city to quickly install emergency cycleways, while the autonomy of the mayor enabled her to effectively lockdown ahead of the rest of the country.

About ten years later, in 2005, the Ethiopian government began to invest heavily in “pro-poor” infrastructure in Addis Ababa. The period marked the beginning of a developmental state based on that of the Asian Tigers, an approach that soon encouraged the country to push for middle-income status by 2025. Alongside the development of its formal economy, the city’s nuanced approach in dealing with the pandemic has enabled public spaces, and its informal economy, to carry on unhindered as it has thus far avoided a full lockdown.

On the shortest trajectories are Paris and Auckland. While Paris has drawn heavily on strong leadership and resolute political will, Auckland’s ability to improve the quality of its built environment has, in large part, been due to its more collaborative governmental approach. Structural changes, involving Auckland shedding layers of bureaucracy, enabled it to redefine itself as the Southern Hemisphere’s largest unitary authority back in 2010. This provided a mandate for city-run departments, including the ADO, to deliver impactful projects that have led to genuine improvements to civic life.

Arguably, the unifying feature which all these cities enjoy in enabling them to better respond to Covid-19 is their ability to employ ‘further’ as opposed to ‘forced’ experimentation. This has essentially allowed them to continue doing the things they were already successfully doing prior to the pandemic. Examples include Singapore’s investment in green infrastructure, Paris and Bogota’s use of the bicycle and Auckland’s accelerated use of tactical urbanism.

Even though global cities are more prone to the shock of unprecedented events, they are also better equipped to deal with them. Innovation, agility and resilience all enable global cities to respond to crises, regardless of their trajectory. Only time will tell whether each city’s approach will be enough, but either way, urban life is here to stay – though certainly not as we once knew it.

Charles Critchell is Fare City’s founder and editor. A qualified architect, Charles has experience of working across a number of sectors including construction, public policy and journalism.