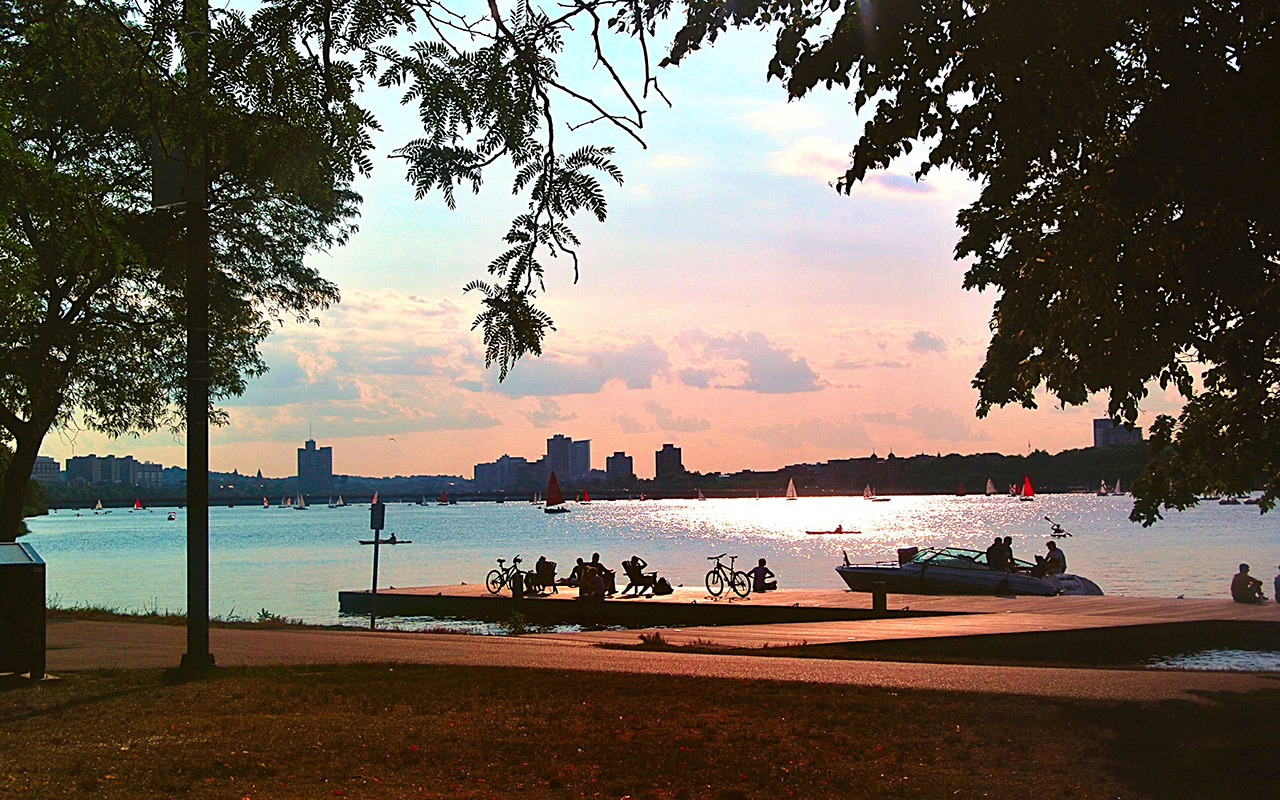 The report Climate Ready Boston sets out an initiative to prepare Boston for the impacts of climate change. Kathryn Firth AoU reports on what other cities might learn

The behaviour of water and heat are inextricably connected in the context of climate change.  Likewise, any action to mitigate the effects of climate change must address both — together and separately. Boston is a coastal city that was rather slow to recognise the imminent perils.  A substantial portion of its Seaport was redeveloped with few precautions taken to guard against sea level rise. However, catalysed by horrific climate events such as Hurricanes Katrina (2005), Irene (2011) and Sandy (2012), the city and region have become quite progressive on coastal resilience.

Likewise, the City of Boston and the metropolitan region is actively putting mitigation measures in place to address the impact of extreme heat. As a result of heatwave-related death tolls — 1,300 in the US in 2003 and some 70,000 people in Europe in 2010 — extreme heat is getting more attention. Common to the impacts of climate change, whether flooding or extreme heat, is the fact that vulnerable populations are the most likely to suffer.

In 2016, the city issued Climate Ready Boston which, along with its parallel initiatives, can provide lessons for other cities endangered by climate change in one way or another.

What is particularly striking about this landmark report is a recognition that it is paramount to work across all scales of the city and region to address climate change — from the entire Massachusetts coastline to individual waterfront neighbourhoods; from city-wide climate preparedness education to ways to mitigate neighbourhood-specific urban ‘heat island’ areas. Further evidence of this is Boston’s recently announced vision for ‘Resilient Boston Harbor’, drawn up by landscape architects SCAPE is working with the city to develop a comprehensive guide for open space investments towards creating more resilient and accessible communities along Boston’s 47-mile shoreline.

1. Updated climate projections for extreme temperatures, sea level rise, extreme precipitation, and storms: The report’s climate predictions indicate that average summer temperatures will get warmer, the number of extreme heat days (over 32ºC) will increase, the number of cold days (below zero) will decrease, the average amount of rainfall per storm will increase, and sea-level rise is likely to increase by 23cm in the near-term, 53cm in the mid-term, and 91cm in the long-term. In short, more violent storms and extreme weather events are to be expected. (It is noteworthy that flood modelling, by the Woods Hole Group, is soon to be completed for the entire Massachusetts coast. There are few cities that have done their own modelling to incorporate sea-level rise the way Boston has).

2. A comprehensive vulnerability assessment of potential future risks associated with extreme heat, stormwater flooding, and coastal and riverine flooding: According to the report, while stormwater flooding occurs throughout Boston today, as the city’s drainage system struggles to manage intense rainfall events and rising sea levels, the less permeable ground surface will be slow to absorb stormwater. It also notes that extreme heat can cause negative health impacts, including direct loss of life, increases in respiratory and cardiovascular diseases, and challenges to mental health.

3. Climate resilience initiatives and principles look across policy, planning, programmatic, and financial issues to address the identified risks. It is also acknowledged that the city will require dedicated public and private partners to implement the initiatives.

i) Generate multiple benefits: for example, flood barriers can provide recreational land while raising the ground level of a new building may provide a public terrace.

ii) Incorporate local involvement in design and decision-making: communities that understand the issues are more likely to change their behaviour. Thus, the city trained volunteers to be ‘climate ambassadors’ who help to facilitate workshops and share information with their neighbours, both formally and informally.

iii) Create layers of protection by working at multiple scales: for example, adding trees adjacent to a new or redeveloped building can relieve the cooling load on the building as well as providing tree canopy that reduces extreme heat.

iv) Design-in flexibility and adaptability: as rainfall is likely to increase, the stormwater system can decentralise and distribute storage to ensure flexibility without disrupting the system itself.

v) Leverage building cycles: it is important to look for low-impact ways to adapt to climate change such as intensifying green infrastructure when a new road is constructed or moving stock to an upper level when refurbishing a retail unit.

4. Identification of focus areas to analyse and solve specific risks at a neighbourhood scale.  This is where Climate Ready Boston sets itself apart from many climate change reports. ‘Focus Area Vulnerability Assessments’ provide deep insight into the types of vulnerabilities that the people, buildings, infrastructure and the economy face at local level. Based on this citywide assessment and analyses, Climate Ready Boston proposes eight locations for flood protection interventions and other resilience measures.

There are 11 key strategies stipulated for the city to become more resilient. While these are all incredibly prescient at first glance, many seem to simply reiterate the principles described above.

Laudably, the report provides a ‘Recommended Roadmap’ setting out the implementation period of specific elements. For example, under Strategy No.4, working with community committees, within two years initial plans will be launched, in five years the initial plans will be competed and long-term the plans will be periodically revised to ensure they are up to date.

Climate Ready Boston relates directly to past and ongoing studies and implementation programmes. This cross-referencing is important in embedding a sense of urgency, how far-reaching the issues are and how to address them. For example, as a member of the 100 Resilient Cities, supported by the Rockefeller Foundation, Boston produced Resilient Boston:  an equitable and connected city (2018) where a chapter entitled ‘Connected, Adaptive City’ is devoted to climate resiliency through the lens of equity.

The Urban Land Institute produced two highly relevant reports focused on the Boston region: Living with Water (2014) and Living with Heat (2019). The latter report builds on community charettes that took place in several of the vulnerable neighbourhoods identified as focus areas in Climate Ready Boston. Living with Water turned to the design community, holding a competition that asked questions such as: What types of resilient strategies could be implemented over time, to upgrade and protect existing buildings and properties within the district? Or how can we develop new urban design solutions that address both sea level rise and more frequent storm events while maintaining vibrant streetscapes?

Finally, true to Strategy No.4, six of the eight focus areas now have ‘Climate Ready’ plans.  Indeed, in the spirit of encouraging the public to take stewardship of their city and neighbourhood, a Coastal Resilience Tool highlights progress on projects and plans for three of the focus neighbourhoods.

The outreach and public relations associated with Climate Ready Boston has certainly raised awareness amongst Bostonians. The fact that the Mayor, Martin J. Walsh, is very much behind the report serves to allay the usual fear that, unless actions are enforced by law, incentivised and/or regulated (per strategy No.9 above), the layers of principles and strategies will not move beyond well-meaning guidance.

All signs indicate that Boston will not wait to add to its 21 extreme weather-related events that have triggered federal or state disaster declarations since 1991. Rather, Boston provides a model for addressing the physical and political aspects of climate change mitigation and ensuring its citizens are committed to the cause. Cities that are still dangerously lagging behind should take note.