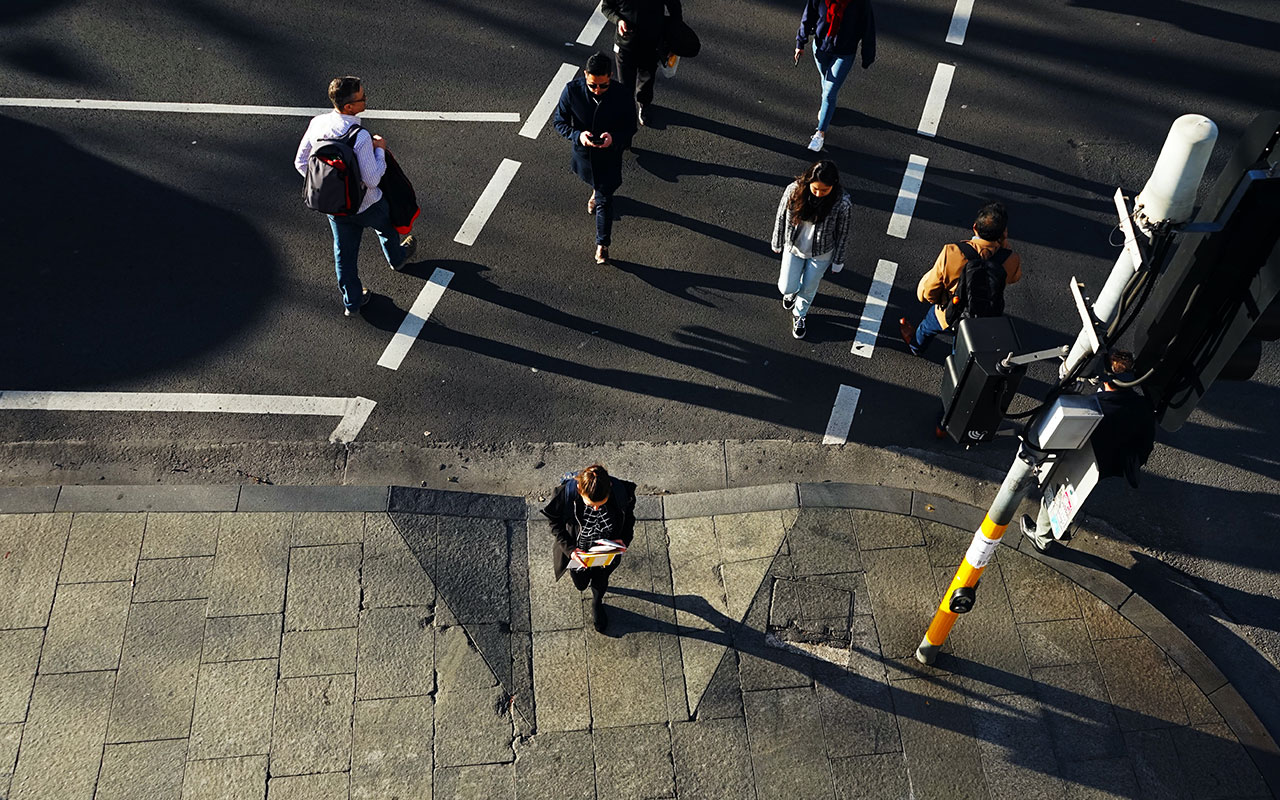 The projector has been tested, chairs and tables set up and the first couple of residents, eager to shape the newest proposals for their town centre, have signed in and taken their place at the front. The room fills quickly and we count 46 residents —not a bad turnout —before we kick off an exercise mapping the places residents like, dislike or would like to improve in their town.

What a world away from today this scenario sounds. I’m sure many designers, planners and placemakers are yearning to get back to the bustle and debate of in-person community design, engagement and consultation. But let’s not rush to look back at these workshops with rose-tinted glasses. Yes, we love community co-design, handing the pen to residents, and watching them shape their home town. But we know that these sessions can be far from perfect, and, if we are honest, far from representative of the actual community.

Where are the commuters who missed their final connection due to an overcrowded train? Where are the young professionals who made a beeline straight for the pub after meeting a savage deadline at work? Where are the full-time parents, running the taxi service for the umpteenth after-school club? Where are the members of the local Bangladeshi community, which your baseline study highlights as an important group with whom to engage and whose needs you should understand?

A year ago at Create Streets, we decided that we must do more to hear from a broader, more diverse range of people and, at the same time, enrich the insights we collect to feed into designs. We knew that people were increasingly time-poor and that sacrificing a weekday evening or a Saturday morning to attend physical events was simply not an option for everyone. Our aim was to create a digital platform to complement, not replace, the traditional workshop format.

At its heart, genuine community engagement is collecting a wide range of opinions and feelings to unbiased questions in order to listen to ideas, gather feedback and design places for the people who will be living there, not the architects back in a central London office. To achieve this goal we set to create a simple platform that was affordable for community groups as well as for commercial practices.

We set out to answer two questions during the development process of our Create Communities tool. Is it easy to use for all members of the community? And is it fun? We ensured that someone could enter the platform, find a street, park or building and leave their comment in as little as five seconds.

At its core, the tool is a customisable interactive map. The platform can be configured with different question formats, from open and closed to using emojis, tick boxes or numbers, which a community member is presented with once they click on the designated area. Importantly, we allow people to zoom into street view and explore other users’ comments at a human eye, not just a bird’s eye view.

The platform matters for your engagement design. Remember 91% of internet users are on mobile!

Version one of Create Communities was ready at the height of the Spring 2020 UK lockdown, so we quickly applied it to a number of now-virtual community group workshops we were running in Tower Hamlets and Ealing. The ability to combine real-time crowd-sourced information during these live workshops enabled us to continue the projects throughout lockdown, designing beautiful, affordable and sustainable new places from our bedrooms and kitchens. Following these projects, we decided to test the platform at scale.

During lockdown, it became apparent to us and to fellow urbanists that how we live and move around in cities and towns would need to change. Together with Create Streets research fellows in Leeds, we launched an investigation on the Create Communities platform, focusing on the city to try and work out what was really important to residents in their local area.

We specifically wanted to know what people valued during lockdown. The local corner shop that had become their lifeline? The small park two minutes up the road where they could catch some fresh air once a day? We also wanted to know what had not worked. Which places were difficult to walk and cycle through? Where in the city was there a shortage of green and open space? Finally, what temporary changes, if implemented, should remain after lockdown?

A staggering 905 individual comments were added in four days for our Leeds project, with no marketing budget

The response took us aback. Following a simple tweet, the comments started rolling in. Quickly, we received many requests asking for us to extend the area, previously limited to the city centre, to the wider Leeds area. Perhaps this was representative of people’s new-found knowledge of their local centres? It was picked up in the local press and The Sunday Times.

It took just four days to gather nearly a thousand comments, which gave us enough data to process. The detail and breadth of information was quite remarkable, resulting in a meeting with Leeds City Council as part of their COVID active travel initiative. Our data contributed to the city-wide temporary travel measures, which have become a common sight across the UK.

We sketched out ideas from the community on how to improve their street. This could then be added to the map for further feedback

One suggestion we received, typical of many more, has been to “remove some of the on-street parking to allow for wider pavements and tree planting on Park Place, York Place and other streets around there”. We have imagined how these responses could become a reality. In the spirit of creating positive change, we drew up a draft for Park Place in Leeds. (Sketch by our researcher Lauren Lawson)

Following the initial Create Communities projects, the advantage of gathering opinions and information online was quickly apparent. We could gather comments quicker, cheaper and with far more detail than before. Comments could be categorised and trends understood that may have been missed before. Online comments allowed the quieter points of view to be heard on a similar level as those who before may have dominated a physical workshop.

Create Communities’ simplicity has led to organisations and community groups from across the UK and even Finland, in partnership with urban designers JTP, to get in touch. The types of projects we are starting or should be starting soon include masterplanning, planning applications with developers, collecting feedback on active travel measures, low-traffic neighbourhoods, local plan engagement, tree-planting, parking research projects and surveys on potential new developments.

Digital maps can be effective at all scales. From a single street, to an entire metropolitan area…even a country

The future of design and planning will involve a significant digital component. We believe the most effective way to do this is by creating products that strip away the complexity associated with technology and make our towns and cities open and accessible to all. A high-tech, low-tech approach where sophisticated technology is delivered in as simple a way as possible should be our focus.

Before getting carried away with the virtues of digital engagement, it is important to acknowledge that they will be most effective in partnership with physical workshops, where you can spend a longer time getting deeper into the problem. Nor should the use of physical communication such as letters and postcards, be lost — particularly for those who do not have access to the internet or are not comfortable sharing their thoughts over keyboard. It’s horses for courses.

We look forward to continuing to develop and improve Create Communities. It is so exciting to grow the number and range of projects with our partners both neighbourhood-based and commercial. Do please get in touch.

David Milner AoU is a projects director at Create Streets, a social enterprise working to improve towns and cities in the UK and internationally

My own view is: Greed

Having explored urbanists’ relationship to Happiness in a previous issue, Andreas Markides turns his attention to a darker force that shapes our cities – Greed...
Read More

All Change at the Academy of Urbanism

The Academy is about to embark on a new chapter in its life as major changes take place within our management structure with two long-serving..
Read More

Angela Brady OBE: PPRIBA, Architect and Design Champion. For years we wanted to build our own office, or create it as part of a development..
Read More
Join and Support
Become a member of The Academy of Urbanism
The Academy of Urbanism is a politically independent, not-for-profit organisation that brings together both the current and next generation of urban leaders, thinkers and practitioners, as well as those that support our programmes, events and activities. If you would like to help us to recognise, encourage and celebrate great places, and the people and organisations that create and sustain them, we encourage you to become a member of the Academy.
Membership

Menu
We use cookies on our website to give you the most relevant experience by remembering your preferences and repeat visits. By clicking “Accept All”, you consent to the use of ALL the cookies. However, you may visit "Cookie Settings" to provide a controlled consent.
Cookie SettingsAccept All
Manage consent

This website uses cookies to improve your experience while you navigate through the website. Out of these, the cookies that are categorized as necessary are stored on your browser as they are essential for the working of basic functionalities of the website. We also use third-party cookies that help us analyze and understand how you use this website. These cookies will be stored in your browser only with your consent. You also have the option to opt-out of these cookies. But opting out of some of these cookies may affect your browsing experience.
Necessary Always Enabled
Necessary cookies are absolutely essential for the website to function properly. These cookies ensure basic functionalities and security features of the website, anonymously.
Functional
Functional cookies help to perform certain functionalities like sharing the content of the website on social media platforms, collect feedbacks, and other third-party features.
Performance
Performance cookies are used to understand and analyze the key performance indexes of the website which helps in delivering a better user experience for the visitors.
Analytics
Analytical cookies are used to understand how visitors interact with the website. These cookies help provide information on metrics the number of visitors, bounce rate, traffic source, etc.
Advertisement
Advertisement cookies are used to provide visitors with relevant ads and marketing campaigns. These cookies track visitors across websites and collect information to provide customized ads.
Others
Other uncategorized cookies are those that are being analyzed and have not been classified into a category as yet.
SAVE & ACCEPT