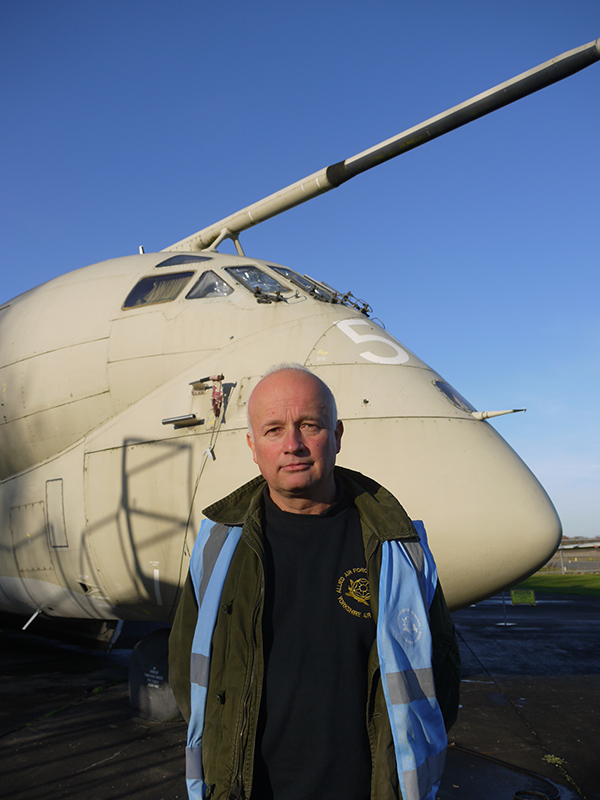 ‘Nimrod, the mighty hunter’ – developed from the beautiful De Havilland Comet, this slightly less beautiful but very effective BAE Nimrod MR2 was the aircraft I worked on as an engineer up at Kinloss on the Moray Firth in Scotland. The big refuelling probe above me was fitted so that she could carry out surveillance missions lasting up to 19 hours and covering nearly 8,500 miles over the South Atlantic during the Falklands War. She didn’t sink any submarines, she just kept them in harbour!

I was born in Coventry and left school at 15 to take up an engineering apprenticeship. In those days it was easy because we actually had an engineering industry, not just museums. I worked at Kinloss and then at Brough in the East Riding, where I met my wife and we settled down in Yorkshire to start a family.

When I was made redundant from BAE there were no engineering jobs going but I can turn my hand to anything and I started doing joinery for friends. That’s how I landed here. I began by building some glass display cases for the Bomber Command building and then moved on to designing and building new exhibits as the museum expanded. Eventually I was asked to take on the role of Heritage Manager, which means doing everything from sweeping the hangars to organising receptions, but I still feel most at home with an oily rag in my hand, up to my armpits in the fuel system of a cantankerous old Nimrod