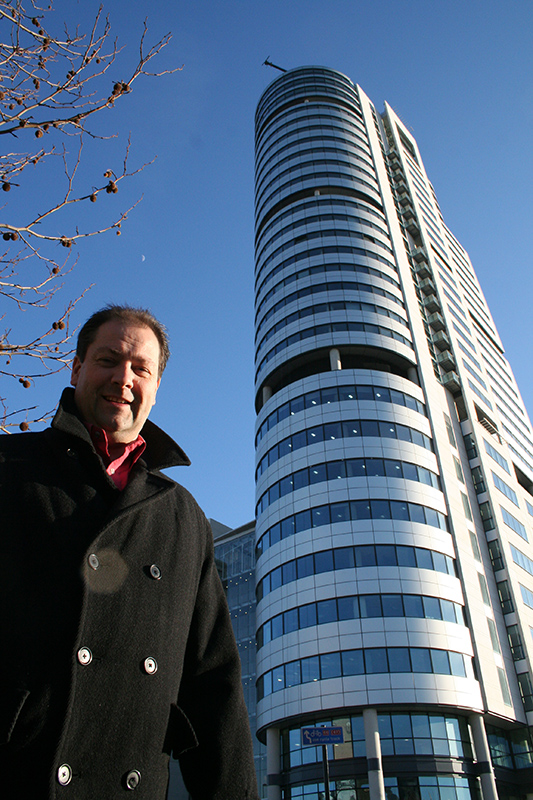 I was born and brought up in Cambridge. My first ambition was to be a naval architect but I wasn’t clever enough, although I always loved maths and art. It was my art teacher who suggested I follow these twin passions by becoming an architect. He set me up with an RSA course while I was still in the Sixth Form, and crucially, with a placement at a local architect’s office. My first project was a little set of steps in Cambridge that are still there. I’m quite proud of those steps.

I chose Huddersfield for my architectural studies. I always found Cambridge a little too genteel and somewhat claustrophobic, but Huddersfield was down to earth and honest. The university had a great department and I enjoyed it immensely.

On graduating I joined Abbey Hanson Rowe, a local firm which has grown to become AEDAS, the world’s fourth-ranking architectural practice. My jobs have likewise grown in size – from three steps to thirty-three storeys!

My place is No1 Bridgewater Place, currently Leeds’ tallest building and known locally as the Dalek. I don’t mind the nickname if the Dalek becomes as synonymous with Leeds as the Gherkin is with London, but some of the bad press my building has received has shown a lack of understanding of the constraints every architect works under. In any case, all the space was sold in record time, and Bridgewater commands the highest price per square foot ever achieved in the city of Leeds, so I’m happy. And when I see it glinting in the evening sun or sailing through the night sky with all its lights on like a gigantic ocean liner, I’m quite proud of it and pleased that I chose a career in architecture.